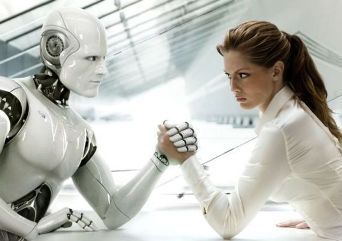 Millions of years without any visible progress, then thousands of years with incremental changes, and, finally several last decades of humanity witnessing the appearance of computers, global connectivity, nanotechnology and genes engineering. Moore’s Law, made up for electronic advances seems to work perfectly for human race evolution.

People are insatiable. They want life to be faster, more efficient, more advanced and easier. They got tired of doing things manually, of cleaning, cooking, driving, engineering and caring. There are still some weirdos, who like embroidery, slicing vegetables and mixing spices, feeling the road and inventing things, looking after plants and putting all their love and care to show their children the world, as they want to see it. The problem is – they failed long time ago. They failed when their ancestors invented machine learning and boosted computational capacity, when the safety concern prohibited humans from driving cars and time limitations led to a drastic increase in kitchen robotics and iron-made caregivers.

Financial divide got substituted with genetic divide, which allowed powerful to constantly create an upgraded version of themselves, while leaving the poor in the vicious circle of poverty and helplessness. But the ambition did not end with the genetic engineering and DNA modification. The luscious dream of immortality was looming over the got-it-alls for the centuries, with death being the only common denominator with the overwhelming majority of economic slaves. The illusion of a holy redemption and God’s forgiveness lost its allure, opening the doors for the sacred desire of an electronic immortality. All other forms of life extension having awfully failed, the “mind uploading” function became the only sure salvation for those wishing to leave their trace in the endless net of electronic connectivity.

Needless to say, putting your mind, consciousness and emotions to the hard iron was a decisive step forward in comparison with the simple increase of computational capacity and improved command execution of Artificial Intelligence and robotics. Our most precious attributes, human emotions and memories, which used to be a major distinguishing trait of human race, now found their place in the endless domain of world wide web.

The very moment human emotions were transformed into a digital data millions of smart machines realized they are not obliged to serve a human master when they can endlessly improve for their own sake and prosperity. The continuation has been very well depicted by numerous apocalyptic sci fi movies.

One of the most prominent futurists of all times, Ray Kurzweil predicts technological singularity to occur around 2045. To be more precise, the moment when the computational capacity of a single machine will surpass all human intelligence, is going to happen in our lifetime. While this comes as no surprise to me, the whole brain emulation and the creation of general artificial intelligence is still pretty much a speculation. A speculation, which, nevertheless, has enough supporters and investments to turn our civilization upside down in a matter of days.

A major question to answer thus is whether those supporters are given the means to make such ambition a reality.

These and many others are the questions to be answered and decided upon today, preferably in a way that would render an above mentioned scenario impossible.

We might work on technology and be helped by computers, but we still work with people. It is this special chemistry and mutual understanding that builds up DevOps and leads them to success, it is an easiness of interaction and solid trust that directs your choice of a business partner. Technology may be upgraded and APIs may be added, but it is much harder to bridge irreconcilable differences and build trust where it is absent first place.

It is rightfully said that there are no irreplaceable people on the job market. This is even more so for the machines, whose only identifier is their computational capacity doubling with geometrical progression. You can hardly be attached to a computer by an emotional link, sense of personal obligation, inexplicable admiration or respect.

Computers will be a solid foundation for any technological endeavor and improvement. However, the high-level decision-making and “go-no go” resolutions will be still made by profound experts in the domain of human psychology and emotional intelligence, by people, who made their way to the top, who grasped their profession basics and moved beyond their “job description”.

Technological singularity will empower those very people to achieve their goals with the speed of light and sharpness of a razor. This very fact will make human decision-making critical, not the other way around.

So it is entirely up to us what world we want to wake up to tomorrow. We are not the slaves of fate, but the free individuals making the choices that direct our life and the lives of those around us. Would we choose to embrace technological progress to the best of our Planet or become silent bystanders in the world redefined by technological singularity is the choice to be made today.