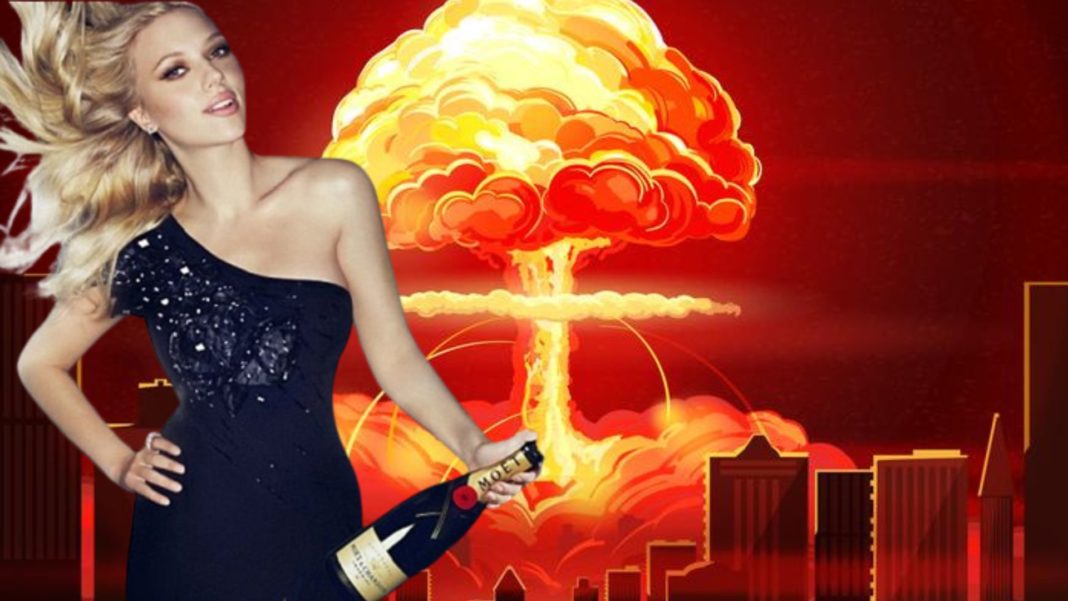 It was 2025. People were preparing to celebrate New Year. After all, they’ve always done it. Many used to associate this with something festive, pure, with the “beginning” of some sort. Many used to write a wish list for the next year with numerous ambitious points. Most people were wishing the return of the normal temperatures.

Maria was a bit perplexed. She didn’t know how to compare this year’s achievements to the last year ones. And, to be fair, she didn’t have much motivation to do so. She forgot to write last years’ wishes anyway. Her friend, Janine, recommended that she writes something, and drowns its dust in champagne afterwards, – to make sure the wish comes true.

She was ready to burst into tears as her only wish was to know whether her parents were alive. For 2 years already she hasn’t heard back from them.

Maria left Russia just in time. She was never a supporter of Putin’s murderous regime, but she also never minded it while it has been providing her parents with mansions all over Europe and luxurious holidays in Maldives and Mykonos.

Her survival was pure luck. In spring of 2023 she was sent to the London office for business. It was incredibly difficult to get a visa being a citizen of then existent Russian Federation. Suddenly, money and connections meant little, when the whole world saw you as nothing more than a nuisance and a potential threat to their national security. Maria’s company was a major international bank, who needed Maria’s knowledge in Russian gas sector for the correct distribution of confiscated Russian assets.

It all happened so suddenly, – she thought. Not that Maria did not have a chance to observe her co-patriots rapidly shedding all semblance of humanity for the last several years, or maybe even decades. But as a spoiled child of the Capitalist system, she could not have imagined that someone’s insanity would be stronger than their desire for self-preservation.

Russian leader was nearing his last months. There wasn’t much choice for his grand finale. It was either a painful death from the metastasis spreading all over his body or an assassination by one of his political rivals. Miserably losing to the nation, he and his predecessors never managed to fully subjugate, he really didn’t have much choice at his disposal.

“If this land is not going to be mine, let it be nobody’s” – seemed to be the overarching messaging of his latest deranged speeches.

The possibility of a nuclear strike loomed over Ukraine ever since the start of 2022 war. Just like before the invasion, however, most people thought it was unthinkable someone would put all the humanity at risk of a complete nuclear annihilation. These were just few political scientists and military experts that shared the realistic pessimism around humanity’s future prospects. They were slowly being “cancelled” by the wider media.

Ukraine was de-facto liberated from a decrepit Russian army, with some exceptions in the regions neighbouring Russia. Moreover, Ukrainian territorial defence has managed to destroy most of the ammunition depots in Belarus, Belgorod and elsewhere, so the war was nearing its last months, if not weeks.

Everything was going well for Ukraine. Everything, apart from the hundreds of thousands of people, slaughtered by Russian soldiers, people, who would never see the light of the day just for being in the wrong place in the wrong time, apart from thousands of kidnapped Ukrainian children, who were most certainly dead now, as well, for the thousands of raped and tortured Ukrainian women, who would never look at a man with attraction again.

And still, the suffering of this nation was not even close to being complete.

Several millions of Ukrainian and Polish citizens died almost instantaneously. Their bodies were torn into pieces, and they never had the chance to feel the pain or to comprehend their fate. Tens of millions who were left to live in the unbearable suffering of radiation eating their organs alive were left with much more horrible prospects.

Maria saw the news of a nuclear catastrophe in Western Ukraine on repeat for several days. She was shocked. And scared. Not that much for the millions of people who died and who were slowly dying in excruciating pain. No. She thought about her parents. She thoughts about her sisters, who stayed in St. Peterburg. What will happen to them? The whole world would now blame this atrocity on millions of innocent Russian people, – she thought.

Maria realised her parents would probably be somewhat jubilant at the decisiveness of their leader. She also realised she didn’t truly understand what they would be jubilant about. Were they happy now? Were they celebrating like they did when the Ukrainian children froze to death in darkness after Russia destroyed all the critical infrastructure in early December of 2022? Were they feeling it is the right price to pay for the “children of Donbass”, who were allegedly killed and tortured by the “Ukrainian Nazis”? Surely, Russian television had no reason to lie to its own people? Ukrainians deserved everything they got. But what about Polish people? Were they also guilty? Well, they never appreciated and supported Russia and its greatness. Probably they were as guilty as Ukrainians, if not more.

As all these thoughts were rushing through her head, Maria felt something didn’t feel right. She has never really seen these tortured children in Donbass. She never really met any Ukrainian nationalists. But she clearly saw the remnants of annihilated Lviv, Przemyśl and Rzeszów. She saw thousands of people flocking to Polish hospitals only to die within hours upon admission.

No one was talking. Everyone was waiting. The whole Eurasia was covered in radioactive smoke and people were told they would have to stay inside for at least 2 weeks, if not more. When Maria could finally call them, her parents did not sound jubilant on the phone. They sounded terrified. Last time she spoke to them they said they were going to Finland.

The assault was not carried by the atomic weapon, akin to the one Russia used in Lviv. It was a weapon that eliminated predominantly human species while leaving forests and most animals intact. No one has ever heard of anything like that and no one really knew what weapon has been deployed. The most surprising thing was that the attack was calculated with such precision, that the radius of contamination extended only to the territories of the Russian state, or whatever’s been left of it anyway. Equally, no city in the vicinity of China has been touched.

The only thing people were certain about was that it had nothing to do with NATO. This organisation has never fully decided anything and never managed to prevent the original Russian crimes and the nuclear strike. It had not saved millions of innocent Ukrainians, Polish and Belarusians just like it hasn’t saved tens of millions of innocent Russian people.

Even in 2025 no one could still prove which state or which states launched the strike that eliminated the majority fo Russian nation. Equally, the lack of response from the remaining Russian population was surprising, to say the least. In line with previous mysteries, Russian leadership was never found, and their deaths were never proven.

The horror and chaos engulfing ex-Russian territories are too gory to detail them here. Whatever was left of Russia has been plunged into chaos, with over 10 million people having fled to neighbouring states, while the rest was engaged in the internal “conflict resolution strategies”. The infected zone was preserved perfectly intact architecturally and nature-wise, but the contamination was so strong no person ever came alive from these “enchanted territories”. According to the satellite images, the nature in the exclusion zone blossomed on scale, comparable to “Avatar” and “Annihilation” movies.

The whole world was waiting for the  day when they could finally go and see the “enchanted Russian forests”.  The whole industry was created on selling the theoretical pieces of land, lakes and chosen buildings to the highest bidder. People were paying astronomical prices to own a part of what they now called a “dystopian paradise”. Some were even comparing bare Russian steppes to America of the Klondike Gold Rush. People were selling all their possessions preparing to venture out to Russia to be one of the first settlers once the contamination is gone. No one, however, truly knew the situation on the ground as no signals worked and no communication was coming from these lands for the 2nd year already.

By international law, most of the “enchanted” territories were given to Ukraine to compensate for the loss of millions of lives and the fact that over a third of its territory has been rendered unliveable for centuries. Similar agreements were made for Poland, Belarus, Slovakia, Hungary and Romania which have now included the territories of Moldova, who decided to rid itself of the Russian presence in Transnistria and join the Romanian nation.

Still, these nations were outraged at the fact the world has not prevented the nuclear strike. All Eastern European states who had been members of the European Union exited the alliance and formed the Ortus Federation of states together with Ukraine and Belarus. While each country now had a democratically elected Leader, Ortus also had a board comprising of the representatives of each respective state, whose collective decision weighted as much as the Presidents’ ones, and in case of a dead-end in the resolution, the instant online referendums were being held in all the states, or the state, that was going to be directly affected by the decision.

Whatever countries were left of the European Union were now frantically looking for geopolitical support from China or America. The ex-EU states were now divided almost equally between the two spheres of influence, with Britain being the leader of the American camp and Germany coordinating the Chinese alliance. Depending on the camp, the countries have adopted dollar or yuan as national currencies, respectively.

Huge territories of Ukraine and Poland were sealed off and most of the world’s GDP went for the containment of the nuclear radiation spreading from the Western Ukraine. Once magnificent city of Lviv now laid in bare ruin, comparison to Chernobyl being a complement this ancient city would never even strive for.

By 2025 the nuclear catastrophe and the subsequent deadly response on Russia took the lives of 150 million people and had over 30 more million slowly dying from contamination.

Maria could be considered lucky. No missile ever hit London. Even the radiation escaping Western Ukraine didn’t reach Britain, and almost none of the Western European states. She escaped her death by a week.

She didn’t feel lucky, however. It was the second year she hasn’t heard from any of her family.

“Are they alive?”- she thought.

“Surely 2 days was enough to escape St. Petersburg for Finland”

“Could they have been killed there as victims of a hatred-fuelled revenge to Russia’s nuclear strike?”

“If they are alive, do they still think it was all worth it?”

“If they are alive, why haven’t they called?!”

Maria pretended to write something on the piece of paper, burnt it, and drank the glass of champagne in one go.

2026 will arrive in 5 minutes. What exciting things will it bring us?